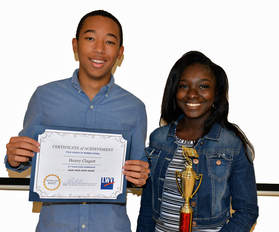 Voting Impacts the Lives of Young People Have you ever heard the myth that your vote doesn't count?   That it doesn't matter who is elected?  Well, it’s actually not so.

Do you care about:
·   Financial aid for college?
·   Finding a job when you graduate?
·   Funding for sports and music programs, prom and other events at your school?

Guess what?  Every single one of those things, and so many more, are decided by our elected officials (the people who run your school board, work in city hall and represent you in Congress).  They are making decisions every day that impact your life.

Video Requirements:
Video Requirements:
1.     The theme is “Civic and Political Participation.” Convey the importance of young people (ages 18-29) continuing political and civic participation in their communities after an election.
2.     Use one or more of the following as the topic of your video to show why young people should care, how they're affected and what they can participate in:  We can’t complain about the way things are going if we don’t stand up for what we believe in and what we want.  Participation is our chance to take control over what happens to us, our families, and our community.


All videos must be submitted in mp4 or .mov format and must be 200MB or less.

Select video submissions will be posted on the contestVOTE website (http://www.youtube.com/user/contestvote) and on the League of Women Voters of Polk County’s Facebook page.

The League of Women Voters of Polk County is sponsoring this contest.  The League: